Operated by The Raymond and District Historical Society 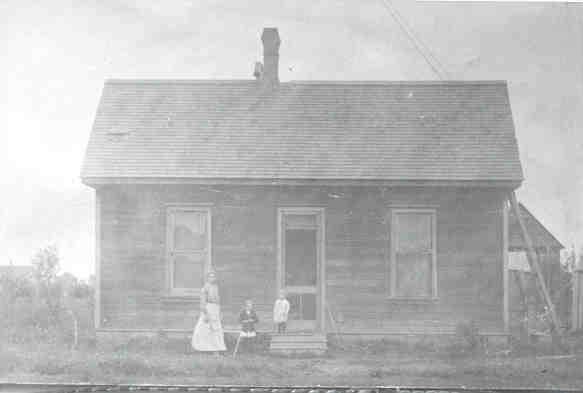 This is the first home that was built in Raymond in September of 1901. It was built by FB Rolfson (aka Bent).

Bent was called by Lorenzo Snow, President of the Church of Jesus Christ of Latter-day Saints, to settle Southern Alberta. He arrived in Stirling June 27, 1899 and stayed and worked until Dec. 25, 1899, when he went back to his wife in Utah. He returned to Canada in April 1901. His wife, Emily Caroline Phillips, and their sons, Ray & Bazel, left Salt Lake July 24, 1901 to join him. Bent had purchase 30 acres in Stirling and planned to settle there. It had been challenging to earn a living in Canada and Rolfsons were forced to live in a tent. In late August it snowed. Emily said:

This morning just after the snow, John W. Taylor come and peeked in our tent. And he sez, “well you people are not very comfortable here are you?” So he called your father out and talked to him about the talk of trying to build a sugar factory at Raymond. Where they built it at Raymond. And he said if he would come over where they had had this meeting he would loan him money to build him a house. So your father went over, the next morning I think it was and they decided to hold a meeting and plan for this sugar factory the first sugar factory that was built there … And so they held this meeting and planned to build a sugar factory. And after that the meeting was over they all walked out through the prairie grass because that’s all there was as far as you could see was prairie grass knee high. And they decided if they were going to build a sugar factory they would have to have a town so the people all got in a circle and they held a little conversation and a meeting and said this would be the town. Well we have the town we have to give it a name so they named it Raymond and that was after Ray Knight.

Bent later travelled back with the first load of lumber. He had been hired by the Knights to build a blacksmith shop for Ephraim Hicks. That shop was the first structure in Raymond. There they sharpened the plow shares that turned over the first land in Raymond at the Knight Sugar Factory.

John W. Taylor lent him $500 to built his own home. He worked on it mostly by himself while his family lived in Stirling. He had to borrow a horse and wagon to move the lumber. When it came time to build the roof George Court, who was living in Stirling at the time, came over to help. It was while George Court was working on the roof that he say the first family arrive in Raymond, the Munns.

The Rolfson moved into the two room house on September 15, 1901. According to Emily, “there was no windows in the house just some board across the window openings, and we didn’t have stove pipe enough to go up through the roof so they made a hole in the boards in the window and put the stove pipe through and that’s where our stove was for about three weeks before we could get stove pipe from Lethbridge.”

In August 1902 Bent served on the first Town Council of Raymond.

This site uses Akismet to reduce spam. Learn how your comment data is processed.